I've been meaning to do this post for a while, not least because I need to make room in my bar, but also because it covers a unique variety of whiskey that I think deserves consideration. A couple months ago, I overheard a couple guys wondering aloud about the Japanese labels up on the bar whiskey shelf, and immediately had to jump in for color commentary, much to my wife's dismay. I hope some of that enthusiasm comes through here. 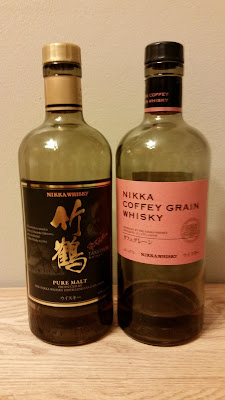 Japanese whiskey is kind of a funny thing. (Yes, for the pedantic, that's often spelled "whisky", which is a stupid and pointless convention that I refuse to follow.)  It's a relatively new practice in Japan, one which has already established a bit of a core style but which culls influences from other, older traditions. Japan has an astounding talent for mimicry, and often when I taste Japanese whiskey I'm reminded of other styles that are being given a deep nod. That's definitely the case with these two.

Both of these are produced by the Nikka Whisky Distilling Company (I'll respect the convention here because it's part of a formal name, nerds) which was one of the first distillers to set up shop in the Japanese islands. Its founder, Masataka Taketsuru (for whom one of the whiskies below is named) came from a family of sake brewers, and enrolled at the University of Glasgow to study chemistry during the brief decades when Japan was open to the West before World War II. He became enamored with the Scottish whiskey-making tradition, apprenticed to a few distillers, married a young Scotswoman, and returned to Japan. After working for an established distiller (now owned by the giant Suntory) he went independent and established his first distillery in Yoichi on the northern island of Hokkaido, following highly traditional Scottish whiskeymaking practices. Later on, the company added further distilling operations, including a Coffey or column still imported from Scotland, and now oversees a whole range of distilling and bottling operations all over the Japanese islands. These folks have carried on their founder's legacy of traditional methods taken very seriously, and it shows in the end product available on our shores.

About: A blended malt, meaning that it's a combination of multiple single malts. There's no age statement on this, so while I hear that various 12-year, 17-year, 21-year, and so on versions are available, we can't be sure that this isn't mostly much younger. Ah well, we must be content with what we're given. According to what sources I can find, it's partially aged in sherry casks, which explains some of its similarity to scotch, which is often treated in the same way.

Tasting Notes: There's a wisp of smoke on the nose of this one that immediately brings to mind scotch, possibly even one of the intense island editions that tastes like moss and sea. Yet it's also pretty and lightly floral, with hints of ripe fruit. The palate is smooth and beautiful, with all kinds of balanced flavors. There's spicy grain and more of that smoke; there's stewed apple, toasted almonds, and cherry blossom; there's orange peel and a curiously buttery quality. I keep wanting to taste it over and over again to catch new hints. The presence of peat builds as it sits on your tongue and is notably present on the long finish, along with repeats of the savory flavors in the palate. Really tasty, and while it occupies a similar niche of flavors as an island scotch (Scapa, maybe?) it seems to strike off in its own, highly refined direction.


Coffey Grain Whisky (again, it's in the name)

About: Being a "grain whiskey", this isn't made from just malted barley but also contains corn and wheat, bringing it a bit closer to bourbon than scotch. Surprisingly (at least to me) it's produced on the same stills that produce the Taketsuru, which are located in the Miyagikyo distillery. Again, there's no age statement, and there's not much information available that I can find about the aging process, but I won't argue too much when the end product is this good.

Tasting Notes: To me this is much more reminiscent of Irish whiskey than scotch. It smells sweet and richly fruity on the nose, with a bit of toasted grain background. On the palate it shares a marshmallow-y sweetness with Irish whiskies, along with a core of rich grain. There are accents of orange peel and cherry blossom throughout, echoing the Taketsuru, but it has a much richer, denser texture. The peat here is a subtle backing only, and the finish is mostly one of lingering spicy grain. It's a markedly different product, and while I think it's less subtle and layered than the Taketsuru it's also deeply satisfying. Anybody who likes a good Irish whiskey like Redbreast would dig this too.


For the curious, there are other Japanese whiskies available on our shores, notably the excellent Suntory-owned Hibiki, and I fully intend to give them a rotating spot in my bar. They may be somewhat uncommon in the US but are worth seeking out, and the Nikka editions above are excellent entry points.
Posted by logophobe at 10:16 PM